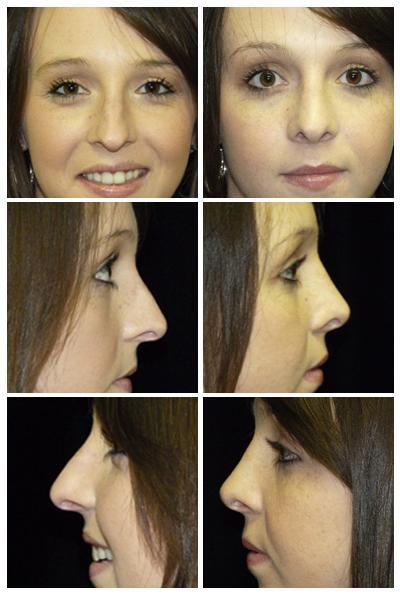 This is a 24-year-old lady who had problems breathing through her nose and had a dorsal hump on the nose with some irregularities on the nose. She underwent a rhinoplasty as well as some inside work in the nose to improve breathing. Postoperatively, we have tipped her nose up, taken down the hump, and smoothed off the nose. The nose now does not have the knots that she had in the upper portion of the nose and it is not indented in the middle portion of the nose. We now have her looking better and breathing better. Her nose has a very natural appearance and not an appearance of an operated nose. 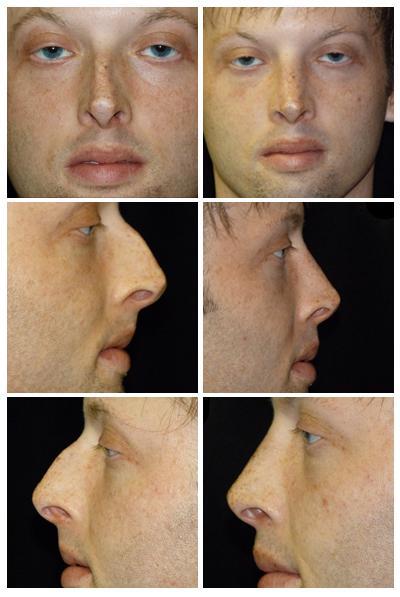 This is a gentleman who had congenital malformation of his nose. He has very thin skin and a large dorsal hump on the nose and the lower part of the nose hangs too much. He underwent a rhinoplasty. Postoperatively shows the nose with much better configuration. 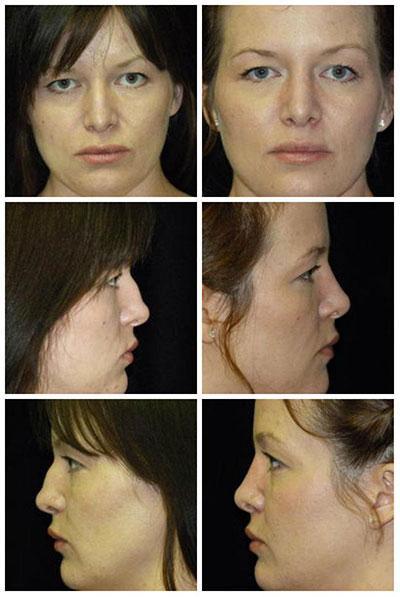 This is a 34-year-old lady who has been self-conscience about the hump that she has on her nose. She has always been reluctant to let people look at her profile pr have pictures made in profile because of the disfiguring hump on her nose. After a rhinoplasty, which was performed as an outpatient, she is now confident about her face and her nose. She can now have pictures made in any position without fear of having the deformity of her nose exposed. 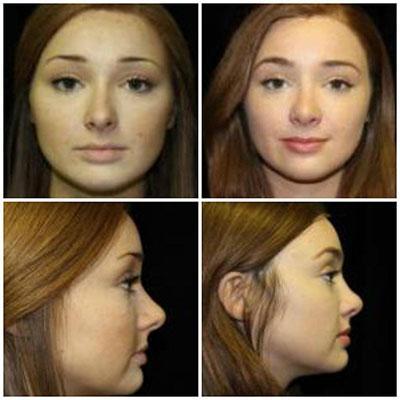 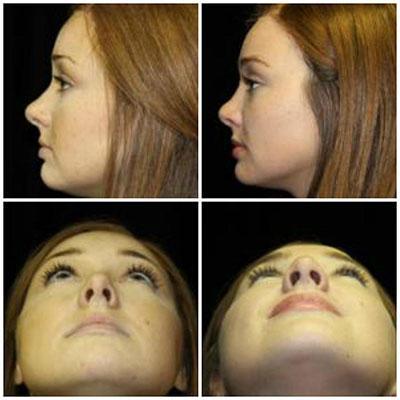 This is a 22YO lady who desired some subtle improvement of her nose.  Her nose tended to project interiorly a little too much making the nose look a little large for her face frame.  The tip of the nose was somewhat widened also.  She underwent a subtle rhinoplasty which improved the appearance of the nose.  It did not change her appearance enough that anyone would even know that anything has been done to her nose.

We tried to perform our rhinoplasties so that they do not give the patient an operated appearance to their nose.  I want the nose to appear natural and fit the frame of the patients face because there is not one specific type of nose that fits everyone.  A rhinoplasty has to be tailored to fit the particular patients face.

This procedure is done as an outpatient procedure at the hospital. 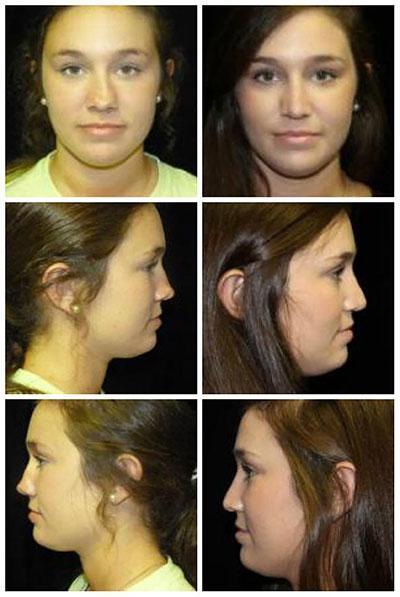 This is a young lady that sustained a severe fracture to her nose. The nose has a saddle deformity where it has been crushed deeply. It has left a large hump on the nose. Also, the nose is deviated towards the left. I have done reconstructive rhinoplasty and septoplasty on her. The nose now is much straighter. Her tip was extremely wide prior to surgery due to her injury. Now I have the tip narrowed and it has a much better shape. The lateral profile of the nose looks much better. Overall, she is breathing much better.

This was done as an outpatient procedure. Insurance covered most of this procedure. 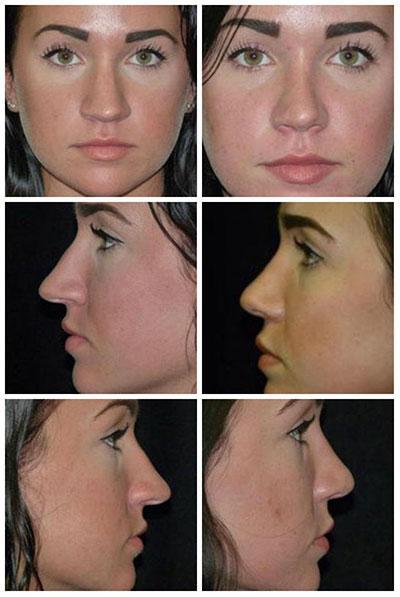 This is a 20-year-old lady who desires some cosmetic improvement of her nose. When you examine the nose preoperatively on the frontal view, the nose is quite wide both at the level of the lobules of the nose and in the middle portion of the nose. On the side view, her nose droops some, she has a dorsal hump, and it projects too much. Postoperatively on the frontal view, you can see that we narrowed the nose and made the nose much smoother. On the side view, we have taken down the hump, tipped the nose up, and pushed the nose back towards the face.

Now the nose is more harmonious with her face. This is a procedure that is done as an outpatient. Insurance will often pay for a portion of this if breathing problems are treated at the same time as the rhinoplasty. 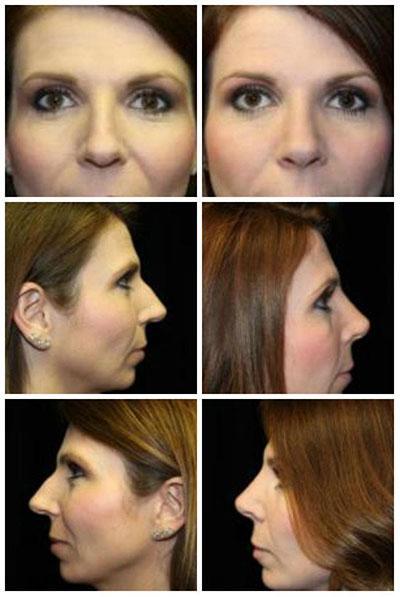 This is a lady that desired some cosmetic improvement of her nose. When you look at her pre-operatively, her nose is very large for her face. She also has a hump and the nose droops some. She underwent a rhinoplasty. This greatly improved the appearance of the nose and has made the nose much more harmonious with her face. Her face looked out of proportion with her large nose and is now much more symmetrical and in proportion with her small face. The shape is much better also. 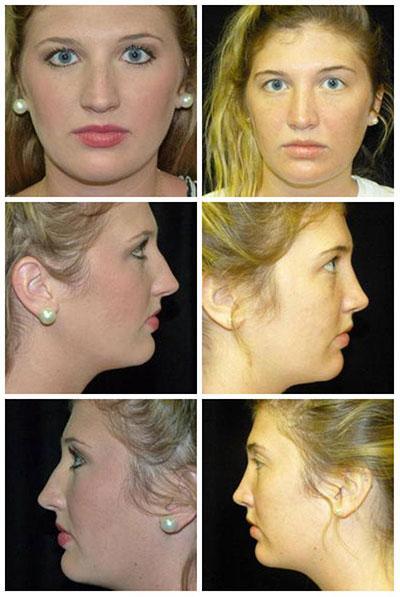 This is a 21YO lady that had a hump on her nose as well as widening of her nose. She also had breathing problems. She underwent a rhinoplasty and septoplasty. Now she breathes better and the nose looks much better. Girls have a much attractive appearance if they do not have a hump on their nose. She had some drooping of her nose just a little and I tipped the nose up some also. Postoperatively, you can see that the nose does not have the hump that it had preoperatively and it is slightly tipped up.

Insurance will pay for the non-cosmetic portion of this procedure. Thus, this saves people several thousands of dollars. 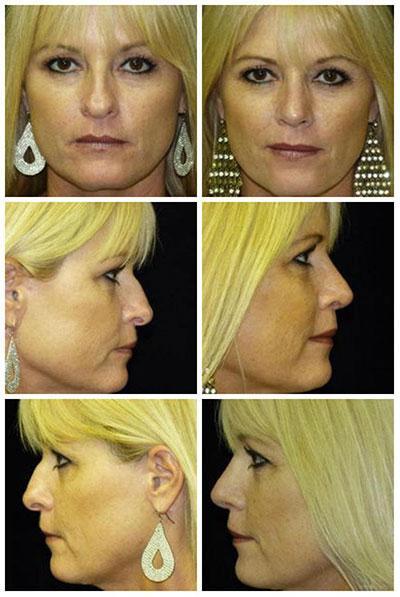 This is a 50-year-old lady who has a very beautiful face.  She has a dorsal hump on the nose, and the nose has multiple irregularities as well as some drooping of the nose.  She desires the nose to be more harmonious with her face.  Thus, she underwent a rhinoplasty.  Post op shows great improvement of her nose.  This procedure was done as an outpatient procedure. 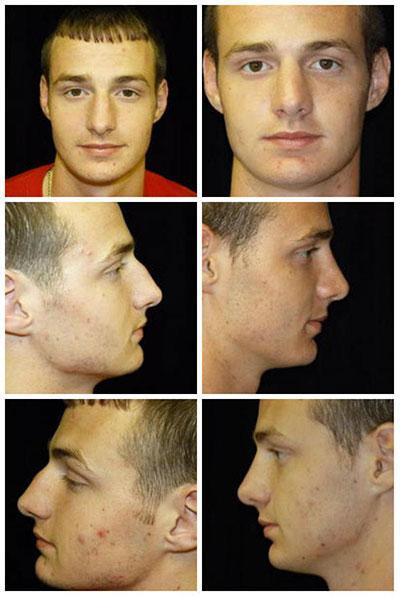 This is an 18-year-old young man who had an injury to his nose.  He had a crooked nose with a dorsal hump on the nose.  He underwent a rhinoplasty with septoplasty.  We were able to improve the appearance of the nose and improved his breathing.  This was done as an outpatient procedure. 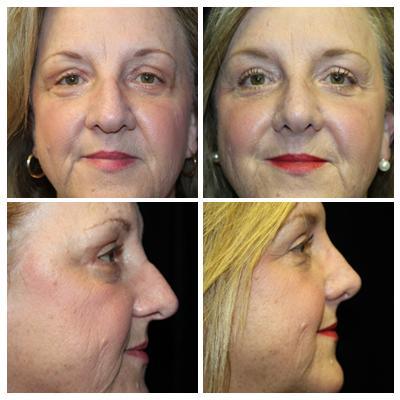 This is a 45YO lady that is here for some improvement of her nose.  She doesn’t like the hump or droopiness of her nose.  With age, the nose will tend to droop and can make you appear older than you are.  She underwent a rhinoplasty.  Now she no longer has the hump on the nose and we have tipped the nose up.  This gives her a more youthful appearance.  This procedure is done as an outpatient procedure at the hospital. 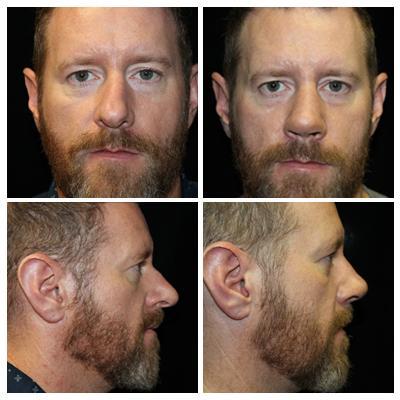 This is a gentleman that had presented with problems breathing through both sides of his nose.  Also his nose was very crooked and it deviated to the right with too much projection towards the tip.  He wanted to get some functional improvement of the nose and improve its appearance.  I cannot get the nose perfectly straight when they are as crooked as his is.  We have gotten much improvement.  On the side view you can see how the nose projects way too much and is somewhat indented at the root of the nose.  I was able to decrease the projection of the nose as well as tip the nose up some and improve the appearance of the nose.  He is breathing significantly better than he was previously.  This procedure was performed as an outpatient procedure.  Insurance will cover the non-cosmetic procedure of nasal surgery. 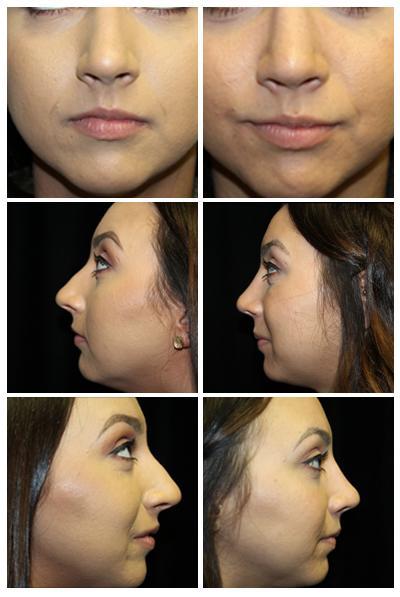 This is a 28YO lady that had problems breathing through her nose.  Also she desired her nose to appear softer.  She had a nose that was somewhat projecting with a small hump with fullness at the base of the nose.

She underwent a septoplasty and excision of turbinates to help improve her breathing.  She also underwent a rhinoplasty to improve the appearance of her nose.  This procedure is done through outpatient at the hospital.