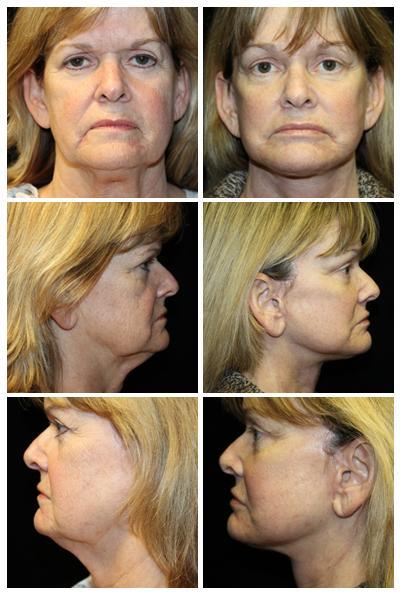 This is a 60YO lady who desires some refreshing of her face. Usually when ladies get in their early to mid 50’s the face starts loosening as well as the neck. Bands will appear and excessive fat develops in the neck and the sharp jaw line starts to disappear. Also the mid-face starts getting loose.

She underwent face and neck rejuvenation. As you can see she now has a very distinct jawline. The bands in the neck and excessive fat are gone. The face has a much more refreshed appearance.

This procedure is done in my office with IV sedation.
Photos submitted by Dr. Feagin

This procedure is done in the office under IV sedation. 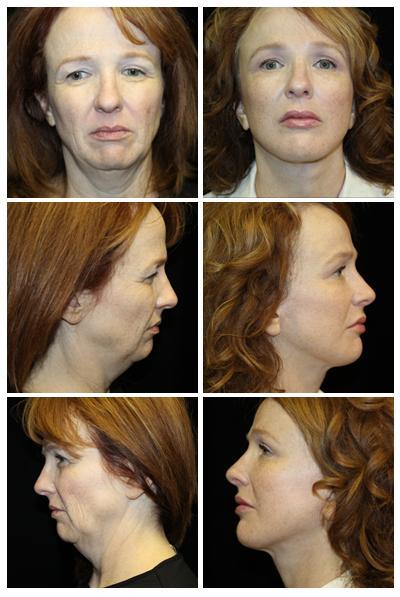 This is a 50YO lady who has noticed some premature aging of her face.  She has some excessive fat in the neck but has lost fat in the face.  She has developed generalized looseness around the mouth, mid-face, and the brow.  She underwent face and neck rejuvenation as well as fat grafting.  When people lose fat in their face, they age prematurely.  The fat grafting rejuvenates the face and the fat will last for many years.

This procedure is done in the office under IV sedation. 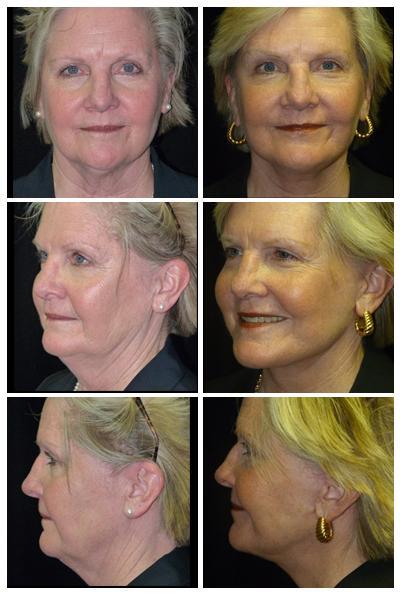 This patient is a 62YO healthy female who wished some improvement in her facial aesthetics, primarily her jaw line and her neck.  Photographs are shown pre and 2 months post operatively demonstrating a clean tight jaw line and a pleasing aesthetic neck contour.  In addition to the facelift, she had fat injections to improve facial aesthetics along the orbital rim, nasal labial folds, and the jaw line. 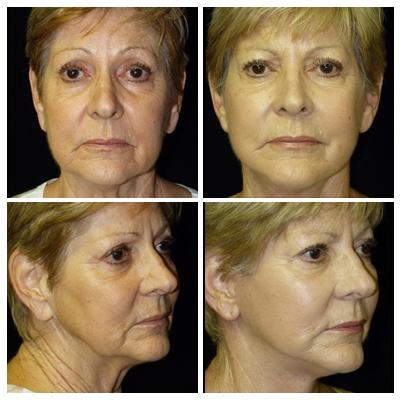 This lady is quite healthy and active. She wishes for some improvement in her face. She specifically wanted improvement along the border of the jaw bone and neck line. She also wished some reduction in the size of her earlobes. She underwent a facelift with plication of the SMAS and fat injections along the mandibular border and mid face. She also had a reduction in the earlobe size. She has gotten a very nice improvement in the contour of the jaw line and improvement in the heavy wrinkles in the neck and thinning of the midline of the neck. She feels and looks considerably younger than her age. 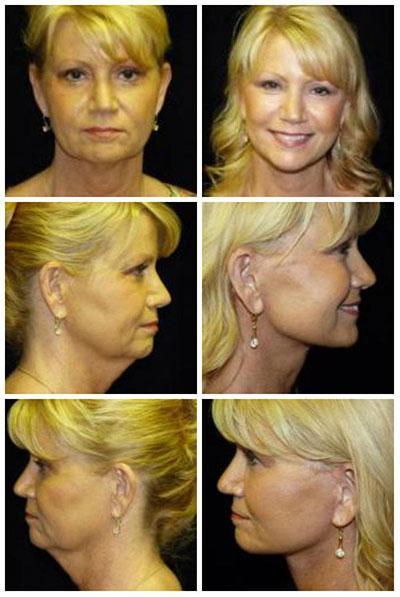 This is a 58YO lady who desires some improvement of her face.  She has some of the early signs of aging that most women get.  She has some excessive fat in the neck.  She has lost the distinct mandibular border.  Also, she has some jowling and hollowness between the jowl area and her chin.  There is generalized looseness of the midface.  I will need to remove some excessive fat of the neck and tighten the loose muscles of the neck.  I will remove fat along the mandibular border and give it a more distinct appearance as well as remove some fat in the jowl area.  Then in front of the jowl area between the jowl and the chin, she has an indentation and I will do some fat grafts in that area. I did a high SMAS facelift on her which tightens the deep tissue of the face.  By tightening the deep tissue of the face and not relying on just pulling the skin tight, it will give a more natural looking facelift and a longer lasting facelift. These procedures can usually be done in the office with IV sedation.  The cost of this procedure is around $7,000.00. 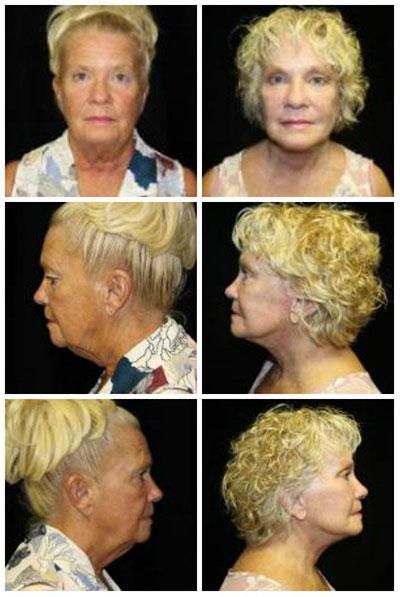 This is a 67YO lady that desired some cosmetic improvement of her face.  She noticed that she was getting a lot of looseness in the neck with extra fat in the neck.  She had generalized looseness of her midface and her brow. She underwent a face, neck, and browlift.  You can now see the lower border of her mandible.  There is a definition between the mandible and the neck now which is a sign of youth.  Also, her eyes appear much brighter since she had the browlift and fat grafting underneath the lower lids.  She has much more youthful appearance and is very happy with her results. 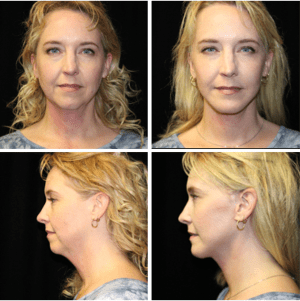 This is a 47YO lady that desires some cosmetic improvement of her face. When I examined her face, she appeared to have extra fat in the neck with a weak chin.  Also, you do not see her jaw line. There is not much distinction between the face and the neck area. She underwent a face and neck lift with a chin implant. Also, I did some fat grafting in the cheeks to give her some more prominence there.  This was done in the office under twilight anesthesia. 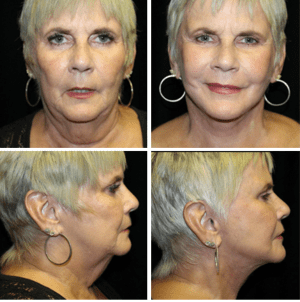 This is a 70YO lady who noticed increased fat in her neck and in the mandibular border.  She had some generalized looseness of the face.  She was starting to jowl and get looseness around the lateral mouth area. She underwent a face and necklift with fat grafting around the eyes and around the mouth.  As you can see, she now has a distinct mandibular border.  I eliminated the extra fat in the neck as well as the loose hanging skin of the neck.  Fat grafts fill in areas where there is deficiency of fat that occurs with natural aging.  This usually occurs at the junction between the eyelid and the cheek as well as in front of the jowl and the chin. This procedure is done in the office with IV sedation.  Patients can go home about an hour after surgery.  They can shower and wash their hair the next day. 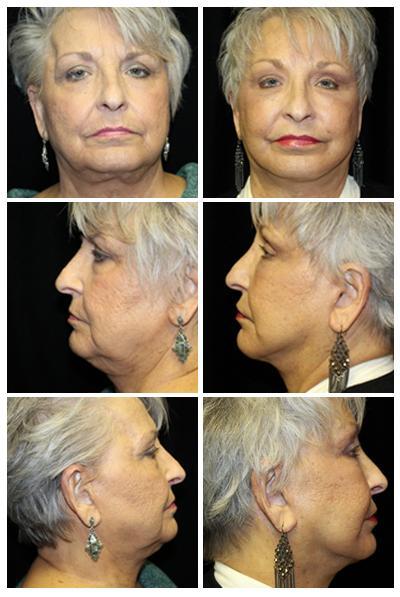 This is a 71YO lady that desired some cosmetic improvement of her face. She had gone to a non-plastic surgeon for some surgical improvement of her face a d neck a few years prior. As you can see in the pre-op pictures she had marked deformities of the neck. She had a significant amount of jowling and no definition between the jawline and the neck area. Also, there was generalized looseness of her face. She had a very indented area on the right temporal area where she had a previous surgery. She underwent a face, neck, and browlift. I was able to fat graft around the temporal area and inferior lateral mouth. I was able to remove fat under the chin and re-sculpt her jaw line. I added fat in areas that needed it and removed fat from areas where it needed to be removed. She had a lot of scarring in her neck area from her previous surgery. I was fortunate that I could remove most of this scarring. Post operative photos show a much more defined jawline with a much smoother transition between the jawline and the chin area. Also the temporal area that was quite hollow has been filled in by the fat grafting. This procedure was performed in my office with IV sedation. 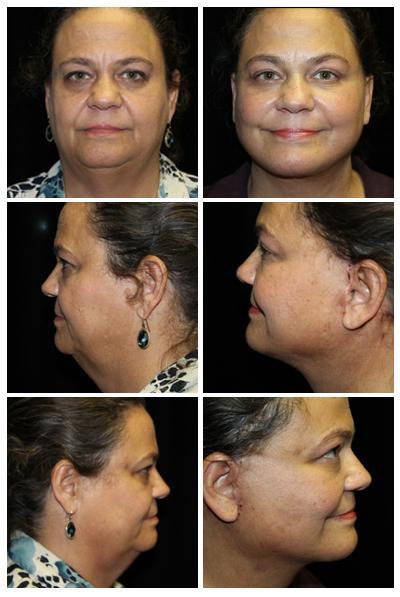 This is a 50YO lady who presents with complaints of excessive fullness in the neck and the fact that her face runs into her neck with no separation of the face and neck. She has lost her distinct mandibular border. She would like to have the fat taken out of the neck and the jawline reshaped. Also, she would like for me to help the indentions in the chin area. She underwent a face and necklift with fat grafting. Now you can see a distinction separation of the face from the neck. She has a nice, strong mandibular border. We also eliminated the indentions under her chin area. This procedure is done in the office with IV sedation. 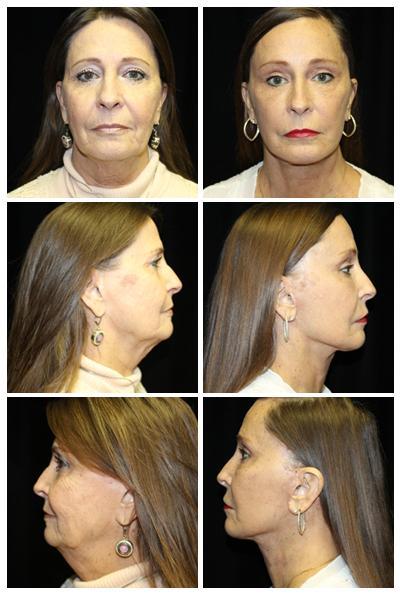 This is a 57YO lady that felt she had a tired look to her face.  She is a very active lady but her face was starting to show significant signs of aging.  She had looseness in her neck with extra fat with jowling.  She had generalized looseness around the mouth.  She had some descent of the brows and her eyes did not appear as vibrant as she desired.  She underwent a face, neck, and browlift in the office.  She had some fat transfers to help restore fat in areas where she was deficient.  The fat was removed from the neck and the jowl area and grafted to the areas she need more fat. As you can see she now has a defined jawline with no more jowling.  Her eyes are much more vibrant since her brow was gently elevated. 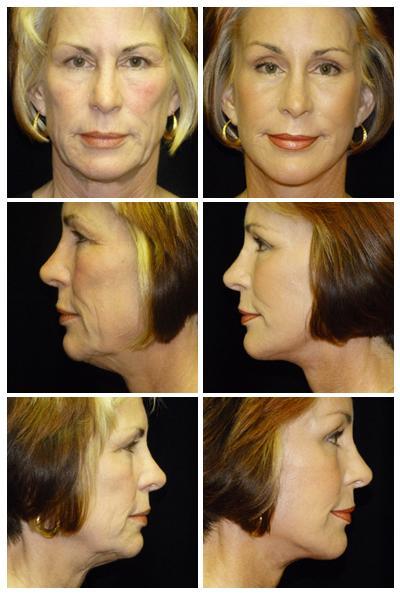 This is a 60-year-old lady who complained of a tired appearance of her face. She was also developing some jowling. Her eyes were not as bright as she desired. She underwent a face, neck, and brow lift. She also underwent a transconjunctival lower lid blepharoplasty. Fat grafts were placed in the tear trough deformities around the eyes. Postop results show her where the neck has been tightened and all the looseness around the neck, mouth and brow area have been corrected. Fat has been used to help fill in some of the hollowness around the lower lids. 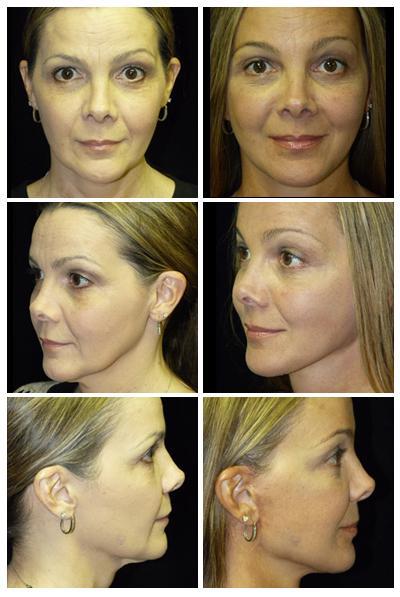 This attractive lady has noticed, with aging, some looseness of the neck skin and loss of the distinction along her jawline. In addition, she wished some improvement in her brow contouring; she underwent a brow and facelift with the repair of the neck muscles. Her photographs are shown about 3 months postoperatively with a much-improved neck and jawline contour and appearance of the periorbital regions. She is quite happy with the results of her surgery and has gotten a nice result.