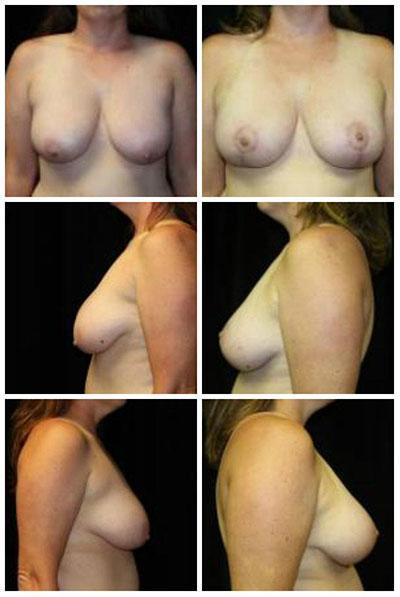 This is a 38YO lady from Enterprise, Alabama.  She was interested in getting some improvement on her droopy breasts.  She complained that the nipples were pointing towards the floor.  Also, she complained of loss of the fullness in the upper pole of the breasts.  She desires to have some reshaping of the breasts as well as some uplifting without the use of implants.

We were able to do a mastopexy on her which reshaped and uplifted the breasts and nipples without using an implant.  This procedure was done as an outpatient and you can return to work usually in about a week after surgery depending on what kind of work you do. 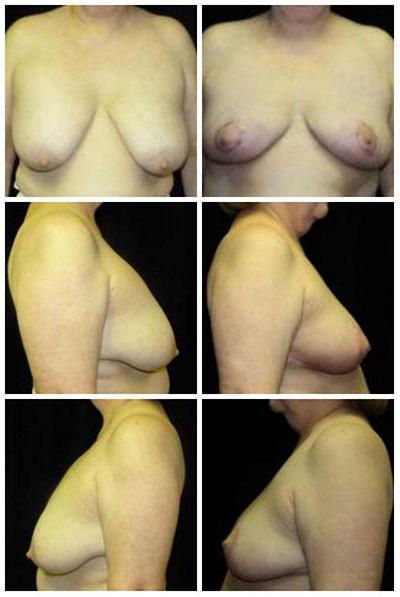 This is a 60YO lady that has had a previous mastopexy with implants.  With time, her breasts have grown and also become droopy.  Her breasts are now large enough that she does not need implants. I removed her implants and did a mastopexy.  She now has breasts that are in good position and shaped nicely with the nipples pointing forward rather than downward. 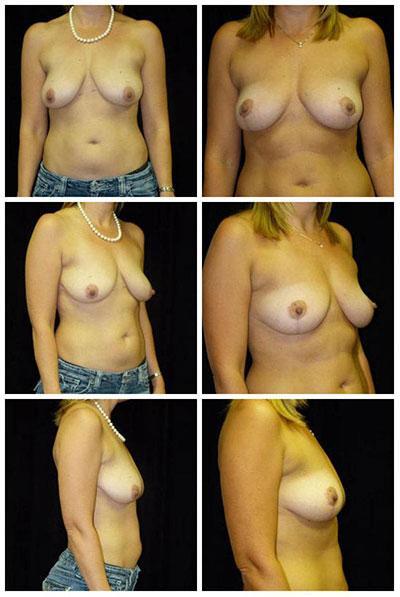 This is a young lady who lost a good bit of volume in her breasts associated with her pregnancies and wished surgery to reposition her breasts back up on her chest. She wanted restoration of her size. After discussion on the various means to get to this goal, she decided to do the mastopexy (lift) first, and then come back at a later date to place the implants. Showing her pre and post op photographs demonstrates elevation of the breasts off her abdomen and back up on her chest. She got very mild improvement with the fullness in the upper pole. 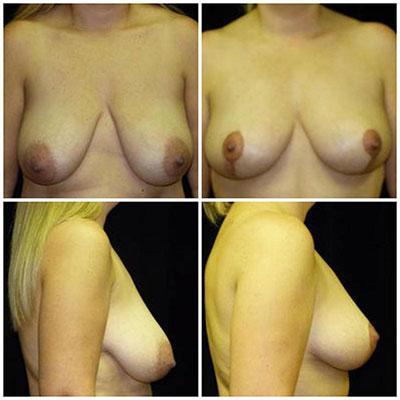 This is a 35-year-old lady from Pensacola, Florida, who desires cosmetic improvement of her breasts. Her breasts are very droopy and she has lost all of the superior fullness to the breasts even though she has moderate-sized breasts. She underwent a mastopexy. Also, I removed some fat from her flanks and injected fat in the upper poles of the breasts to give more superior fullness of the breasts. Mastopexies alone will not maintain a lot of superior fullness because gravity tends to stretch these out and they tend to fall. You can either put fat grafts in this area or implants. Thus, she got her waist shaped up as well as the breasts made more full superiorly. 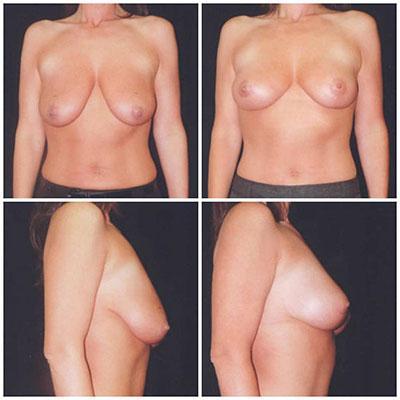 This is a 38-year-old woman, presently a D cup, who lost around 50lbs. with diet and exercise.  She wanted to maintain her size, not be any larger, but wanted her breasts back up on her chest with more projection.  She underwent a superior medial mastopexy with augmentation of the upper half of the breast with some of the inferior breast tissue.  This has given her nicely shaped breasts that are repositioned on her chest with some fullness on the upper poles and without the use of an implant. 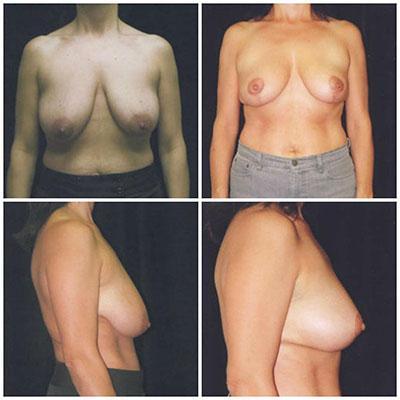 This is a 40-year-old woman from the Dothan area who wishes some improvement in her breasts following the birth of her children and weight loss.  She was otherwise happy with the size of her breasts.  She had extremely poor skin tone to the skin with striations from her pregnancy over the surface of the breast skin.  She underwent a superior medial mastopexy with internal rearrangement of the breast tissue to provide for fullness in the upper pole of the breast and surgical needling of the breast skin to improve the skin tone.  She is very happy with the new shape and projection of her breasts, which has opened up a wide array of new clothing options for her. 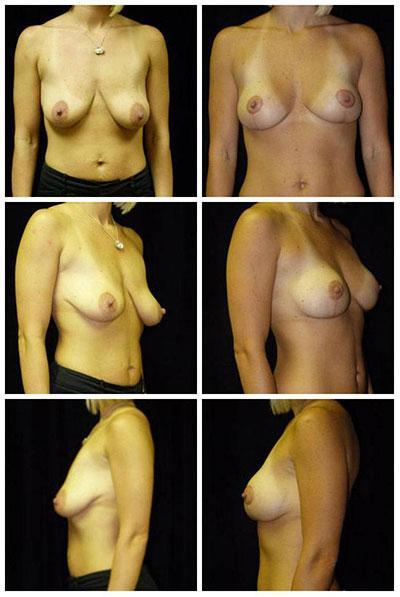 This is a young woman who is a 34C.  She was a DD prior to her pregnancies and got as large as an F with her pregnancies.  She wished an augmentation and a lift.  Her skin tone on the breasts was extremely poor.  We decided instead to do the mastopexy alone and see if she would be happy with the results of the mastopexy without implants.  Because of the poor skin tone of her skin, I did not feel that she would handle implants well over the long term.  Her post operative pictures are 2 months following her mastopexy alone.  The shape of the breasts is very nice.  The upper poles have some improved contour from repositioning of the breast parenchyma internally.  She has gotten a nice result.  She is pleased with the surgery and has opted not to pursue breast implants. 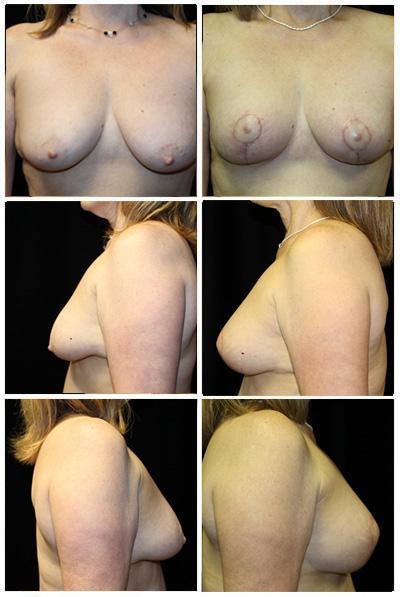 This is a 55YO lady from Destin, Florida who desires some cosmetic improvement of her breasts.  She has noticed that she has gotten some drooping of the breasts and has excessive fat in the sides of the breasts. She also has lost fullness in the upper pole of the breasts.

She underwent a mastopexy with liposuction of the lateral chest and breast area.  This tissue that we removed from the lateral chest and breasts was processed and then injected in the upper pole of the breasts to give her upper pole fullness of the breasts.  We were able to do her without using an implant and used fat grafts instead.  This procedure is done as an outpatient procedure at the hospital. 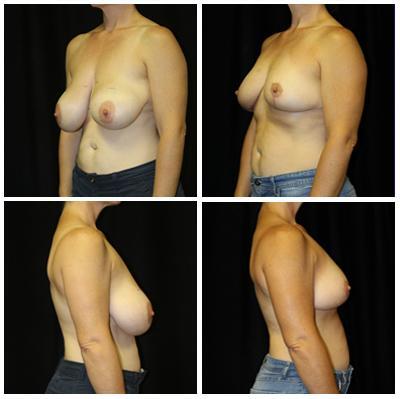 This is a 40ishYO female that has had saline breast implants over 10 years ago. She went from a D cup to a DD. She subsequently got pregnant and upon presentation to my office was buying G cup bras. She had the complaints typical with someone with large breasts with neck, back, and shoulder pains, rashes beneath the breasts. She was athletic and the size of her breasts was making exercise difficult. On exam, her breasts were large and dense. Probably 60-70% of the breast volume was breast implant. Most of the breast tissue was beneath the inframammary crease. She had numbness and tingling in the fingers from the weight of the breast compressing the nerves in her shoulders. She decided to remove her implants and do a breast lift. Since the majority of her breast was implant, we wanted to use as much of her breast tissue to maintain some breast volume. All the breast tissue within the mastopexy incisions was de-epithelialized (the skin was removed) and this tissue was buried beneath the breast to provide some projection. She has maintained nipple sensation and the breasts are nicely shaped with good upper pole fill. Her neck, back, and shoulder symptomatology has completely resolved. Exercise is not a much more pleasurable endeavor. She measures a large C/small D. 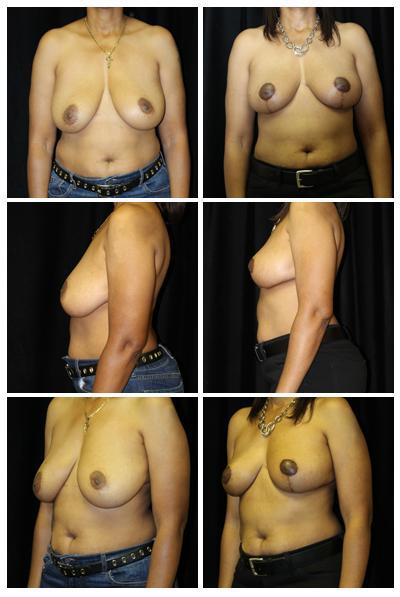 This is a 40ish YO lady that is healthy.  She liked the size of her breasts but wanted them back up on her chest.  She had bilateral nipple sensation which was somewhat important for her to maintain.  During the consultation, we discussed the methods available to lift the breasts.  Some of the methods had a better chance of maintaining nipple sensation but the shape was not as good.  Other methods, which were her preference, created a better shape with a slightly reduced chance of maintaining nipple sensation.  She underwent a superior medial pedicled mastopexy.  She had a completely uneventful post operative course.  She has maintained nipple sensation bilaterally and is thrilled with the cosmetic appearance of her breasts.  She has lost less than a cup size with the lift.  Shown are before and two months post op photographs. 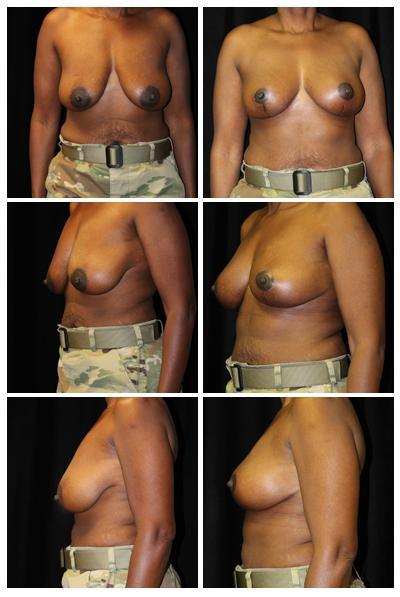 This is a lady that was seen for consideration for a mastopexy.  She like her size but wanted her breasts back up on her chest.  She underwent a superior medial mastopexy which allows for some repositioning of the lower breast tissue to the upper pole to facilitate some better contouring.  Her post operative course was entirely unremarkable.  She lost about ½ cup size following the surgery but her breasts are back up on her chest, off her abdomen, and have a much better shape.