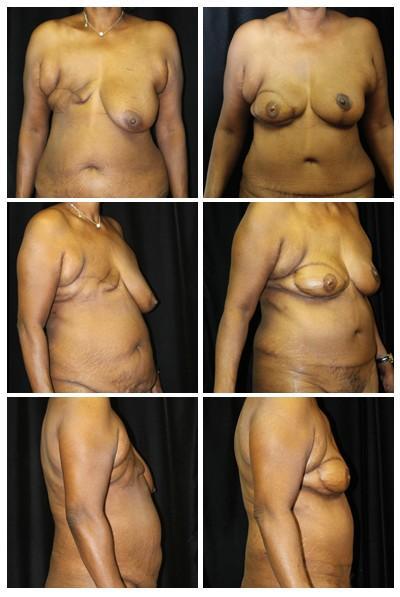 This is a black female who had right breast cancer and is s/p mastectomy.  Surgical margins were clear.  The lesion was quite small and found on mammogram.  There was no lymph node involvement.  The caner did not require chemotherapy or radiation.  She was seen to discuss her options for reconstruction.  We discussed her various options, both implant and autogenous type reconstructions.  She was an excellent candidate for an autogenous reconstruction which we did.  The 1st operation was the tram flap which transferred skin and fat from her lower abdomen to create a right breast mound.  She had a small amount of flap loss laterally that required a small revision.  Subsequently she had nipple areolar reconstruction on the right and a lift on the left side.  Her post op photographs are about 9 months after the final series of operations.  Symmetry is good as far as size and projection of the breasts.  She has some deficit in the upper, outer pole of the reconstructed right breast that would benefit nicely from fat injections.  She also has very prominent axillary breast tissue which if excised would create a more aesthetic reconstruction.  Her breast size before surgery was a D cup and she is now a large B/small C. 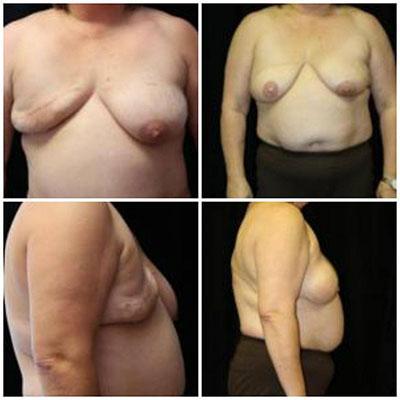 This is a patient that found on self examination a mass in the upper, inner quadrant of her right breast.  She underwent a mastectomy with sentinel node biopsy which was negative. She did not require chemotherapy or radiation.  In her desires, she wanted to do as little as possible to the left breast and wanted her recovery to be as brief as possible.  We used the left breast as the model and therefore opted for an autogenous tissue reconstruction.  Of the two available, her abdomen, or her back, the back gave us the best option as far as camouflaging the scar and symmetry with the opposite left side.  She declined to do anything to the left breast i.e. enlargement or lifting and use it as the model for the reconstructed right breast.  She underwent a latissimus dorsi myocutaneous flap from her back transferred to the right breast.  After several months to allow the swelling to abate, we returned to the operating room for reconstruction of the nipple areolar complex and later tattooing.  She has gotten a very nice result from the surgery with excellent symmetry between the two breasts.  She had an uneventful recovery and no further sequela from her surgery. 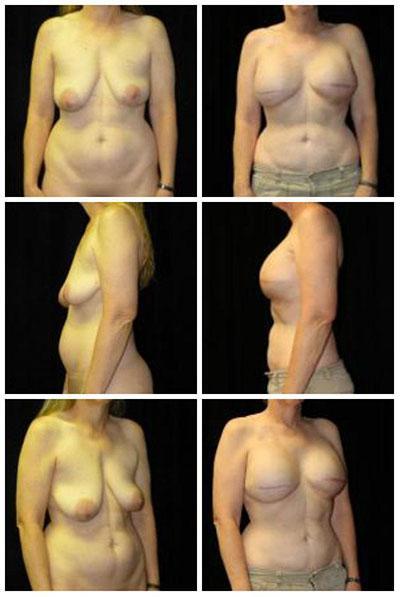 This is a middle aged lady that was found to have cancer on her yearly mammogram.  She had an extensive family history of breast cancer.  She opted for bilateral mastectomies.  Her breasts were asymmetric and droopy.  We did a simple mastectomy with removal of the nipple areolar complex on both side and implant type reconstruction.  She underwent bilateral mastectomies with sentinel node biopsy of placement Alloderm with a tissue expander in the first stage and subsequently underwent expansion of the skin to form the breast mound.  She then underwent chemo and radiation followed by exchange of the tissue expander for the permanent implant.  Photographs shown are several months following the implant/expander exchange.  At this point, we would proceed on with the nipple areolar complex reconstructions which she has declined at the present time.  She got a very nice result from the reconstruction as far as the breast mound reconstruction.  The breasts are larger than they were preoperatively.  They are now up on her chest and have a nice youthful shape with upper pole fullness and some glandular ptosis in the lower poles. 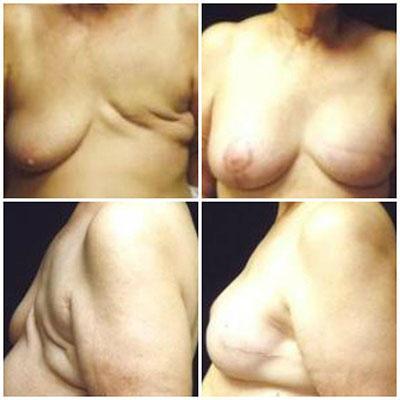 This is a 58YO lady from Enterprise, AL.  She has been diagnosed with left-sided breast cancer and has had a mastectomy on the left side.  She was interested in getting reconstruction of her left breast and making her right breast looking more symmetrical to the left.  In order to reconstruct the left breast, there are two options.  One option is to use a tissue expander which is a saline implant that has a special valve attached to it so you can slowly stretch the skin over several months.  At that point, we would come back in and put in a silicone implant once the tissue is stretched to the size the patient desires.

The other option is to use a transverse rectus abdominis muscle flap which takes the fat from the lower abdomen and reconstructing the breast.  When you use this technique, you do not have to use an implant.  In order to make the right breast look more symmetrical and more youthful, I did a mastopexy with a small breast implant.  This has uplifted the right breast as well as reshaped it. Now the breasts are much more symmetrical in size and shape.  Insurance will usually pay for a significant portion of this procedure.

You can see in the pre-op view that she has had a mastectomy with excessive skin and wrinkling.  The right breast is droopy with the nipple pointing inferiorly.  Post operatively the breasts are much more symmetrical and positioned more closely on the chest wall.  She has elected not to undergo nipple reconstruction on the left breast.  This can be performed if someone desires. 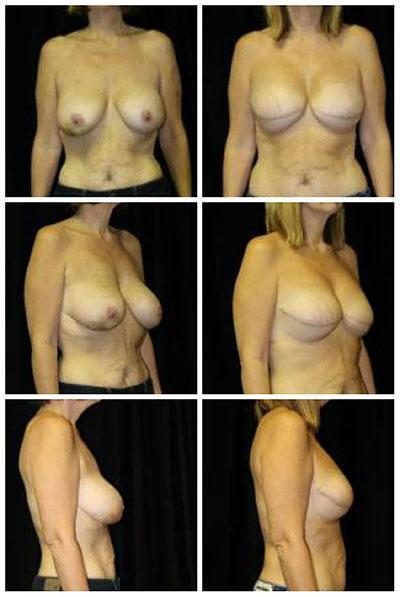 This is a patient that had prior breast implants and was found to have a tumor in the nipple areolar complex on the right breast.  She opted for bilateral mastectomies with immediate reconstruction that was done with Alloderm and tissue expanders subsequently exchanged for permanent gel implants using the Natrelle textured anatomic implant.  The implants were 655cc.  She is shown following the implant exchange operation.  She has opted not to pursue the nipple areolar reconstruction.  The shape of the breast has improved with better upper pole fullness and better projection.  The droopiness has improved.  She has a nice, feminine figure in clothing.  The nipple areolar reconstruction could be done at any time with a smaller operation or with tattooing. 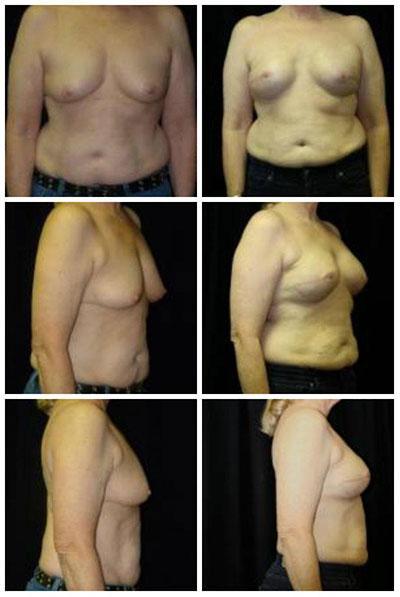 This lady had a significant family history of breast cancer.  She had genetic testing done that demonstrated that she was a carrier of the BRCA gene which put her at a higher risk for developing breast cancer in her lifetime.  After discussing her options with her general surgeon, she opted for bilateral prophylactic mastectomies, bilateral Oophorectomies, and immediate breast reconstruction.  She was an excellent candidate for the nipple sparing mastectomy which she had done.  At the same setting, she had her ovaries removed and I completed the surgery with placement of dermal matrix to form an internal bra followed by placement of tissue expanders.  She was a large B/small C preoperatively and wished to be a full C with some upper pole fullness post completion of the reconstruction.  Using tissue expanders allowed us to do that and give her a view of what she would ultimately look like.  Over the ensuing months she came to the office for fill and once we were at the volume she was happy with, we returned to the operating room and replaced the tissue expanders for long lasting implants.  She is now shown in post operative photographs about 9 months out after we began this process.  She has a fuller upper pole contour, larger cup size, and has maintained good breast symmetry.  This operation allowed her to keep her own nipple areolar complex and minimize the extent of the scarring. 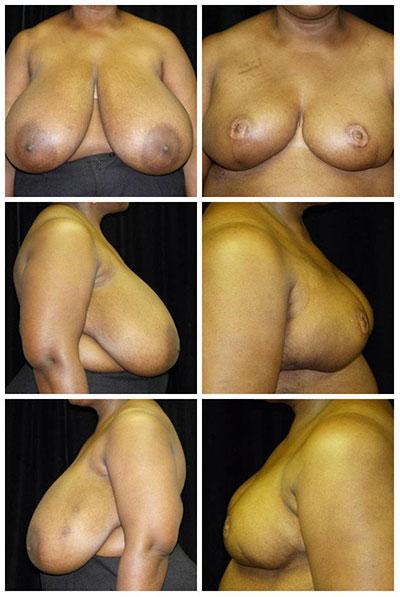 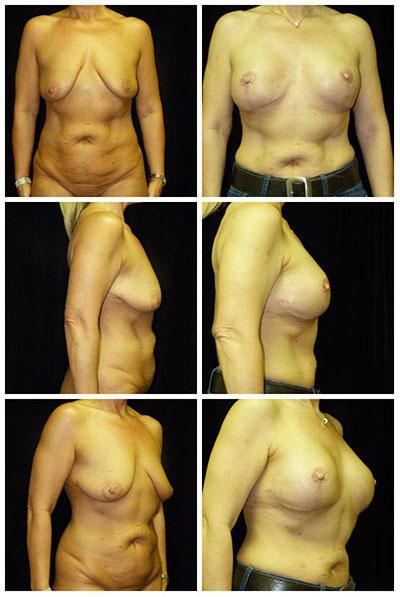 This patient had numerous family members with breast cancer, had herself numerous breast biopsies, and had genetic testing that indicated a very high risk for developing breast cancer in her lifetime.  She opted for bilateral prophylactic simple mastectomies with immediate reconstruction.  The mastectomies were done through a wise pattern (breast reduction) excision removing redundant skin on the breasts in addition to the underlying breast parenchyma and reconstruction with implants and biologic dermal matrix suspension internally.  She subsequently had reconstruction of the nipple areolar complex.  She presently is a large C/small D.  The breasts are significantly better shaped than that of her preoperative appearance.  Her breasts are soft and symmetry is excellent. 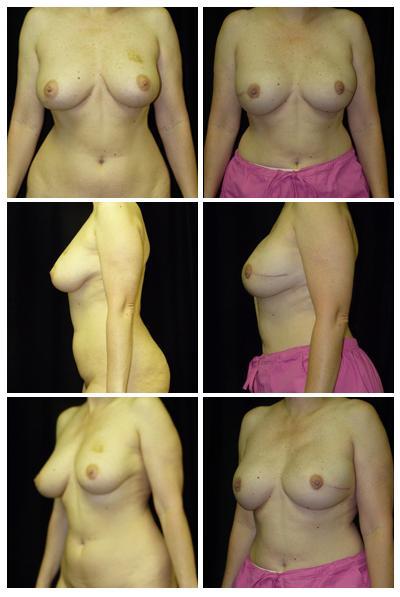 This patient was found to have a lobular carcinoma in situ on her left breast. This showed up on a

routine mammogram. She had frequent mammograms and multiple biopsies on the left side. She had a pronounced family history of breast cancer. She was given multiple options and opted for bilateral mastectomies with immediate reconstructions. Because the tumor was small and deep, it was an option to do her mastectomy as a nipple sparing mastectomy, which was done through periareolar incisions with lateral extensions. Her mastectomy was done by Dr. Scott Robbins. At the completion of the mastectomy, Strattice dermal matrix was placed to serve as an internal bra with placement of tissue expanders which were expanded over time to the appropriate volume. A second operation was carried out to replace the tissue expanders with a permanent implant, remove the breast tissue beneath the nipple areola complexes, and revise Strattice on both sides. She has gotten a very nice result. She has maintained pretty much her breast size and shape and her own nipple areola complexes. She had negative margins on all of her resections and remains cancer free to date. 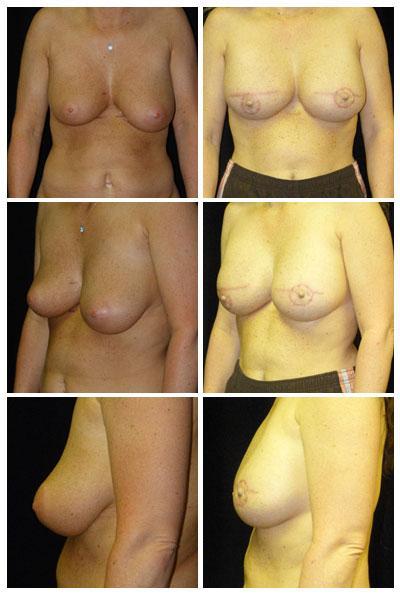 This is a middle aged healthy female seen for both a breast reduction and contouring surgery on her abdomen.  Her breasts were large and symptomatic and she was ultimately a good candidate for a breast reduction.  She also desired some improvement in her truncal contour specifically the apron across her abdomen and the fullness across her flanks.  She had excess skin and fat on her abdomen and flanks as well as stretched out muscles as a result of pregnancies.  She decided to do the abdominal surrey first to give a better idea of the size breasts she ultimately wanted to have to match the torso.  She underwent a belt lipectomy which involved tightening the rectus muscles, suctioning the abdomen and flanks, and removing excess skin across the abdomen and flanks.  This results in a circumferential scar around the torso that is low where it can be hidden.  It also elevates, triangulates, and flattens the mons to a more youthful appearance.  She now has a defined waist.  Clothes, lingerie, and swimwear fit much better.  She is more comfortable sitting.  As shown in the before and after photos sitting, she no longer has a belt of skin and fat extending out over her thighs.  She has gotten a very nice result from her surgery.  She is quite pleased and anticipates pursuing the breast surgery within the year.