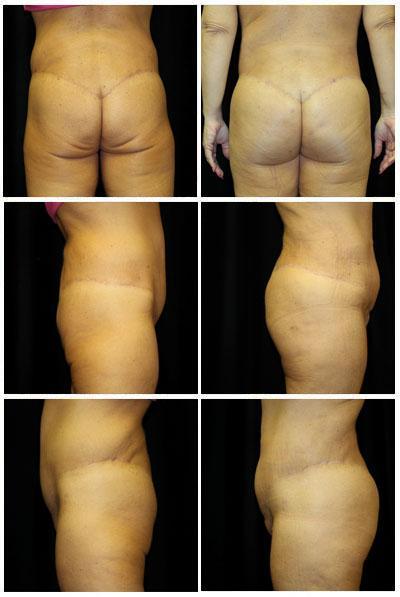 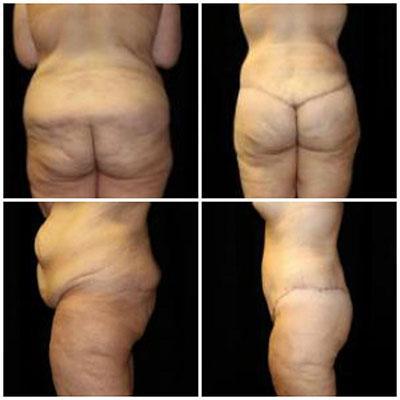 This is a 38YO lady that desires some cosmetic improvement of her buttocks area.  She has excessive fat in the flanks as well as very loose, sagging buttocks with loss of projection in the lower portion. She complains that her pants do not fit properly in the buttocks area.

She underwent lifting of the buttocks with fat injections known as a Brazilian butt lift.  She has done really well with this and is pleased with her results. 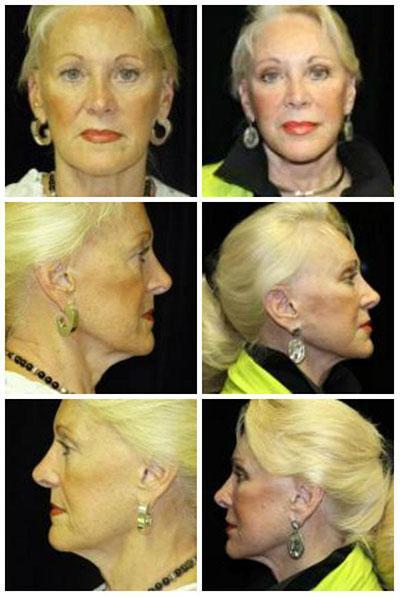 This is a 73YO lady that I saw about some cosmetic improvement of her face.  She noticed that her skin was getting loose and she had lost some volume in her face.  She did not want to undergo a facelift at this time.  Thus we did fat grafting to her face.  It helped fill out the areas of her cheeks, the mouth, the mandibular border, as well as the temporal area and around the eyelids.  This is a minor procedure that we do in the office.  The fat is harvested from the abdomen and processed and injected into the areas that need the fat.

There is very little down time with fat injections and there are no incisions, just small holes where a needle goes through to inject the fat. 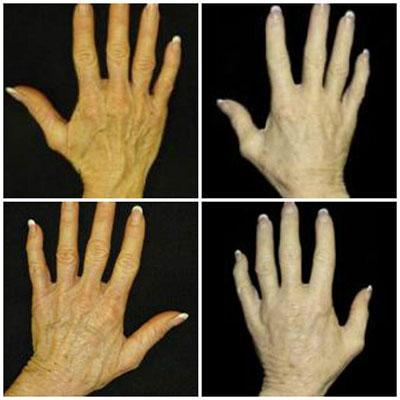 This is a 55YO lady that has been showing progressive aging in her hands.  She has lost subcutaneous tissue in the hands and this has made the veins and tendons quite visible.  It has also made the skin look wrinkly and creped.   She underwent fat grafting to the top of her hands.  These fat grafts should be long lasting.  The veins are not very prominent now and you cannot see the tendons in the hands.  The skin quality looks much better and her hands have a much more youthful looking appearance.  This is a procedure that can be done in the office. 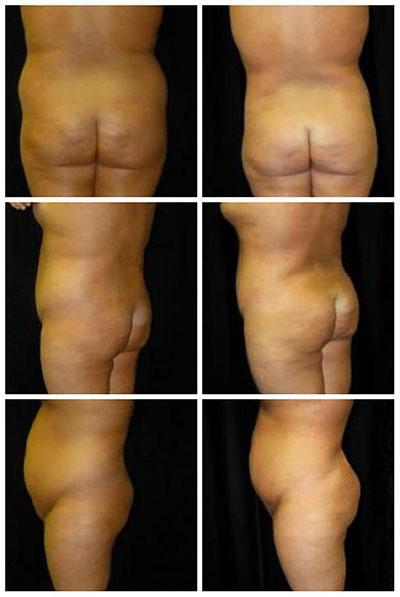 This young lady actually presented in our office for reconstruction of her breasts following double mastectomies for breast cancer.  Part of her reconstructive efforts involved fat grafting to improve the contour of the reconstructed breast.  We chose her flanks for the donor site.  We used the leftover fat to improve the contour of her bottom.  We had just enough fat left over to improve the roundness of her bottom but not so much the projection.  She is shown about 3 months after her surgery.  The contour will continue to improve.  This operation tends to change the buttock and flank contour from a “double B” to an “S shape” which is a more feminine shape.  It also tends give more definition to the buttock.  She got a very nice improvement of the contour on her backside and the improvement in the breasts themselves 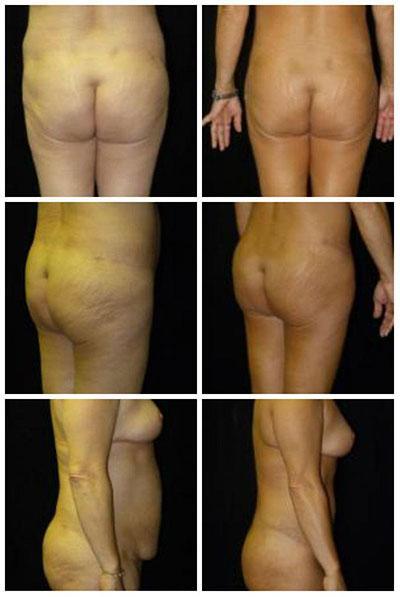 This is a young lady that wished improvement in her contour.  She had in conjunction with an abdominoplasty, suctioning of her flanks and fat injections in her buttocks.  She underwent a Brazilian butt lift.  Shown are her pre and post op photographs of her flanks and buttocks.  Suctioning gives a more feminine concave contour and a better defined waist.  It also helps define the upper portions of the buttock.  Her fat grafts were placed primarily to improve the roundness appearance of the buttock and not so much projection.   This procedure gives a more “S” shaped curvature to the lower back and buttock.  It changes her backside contour from a square shape to a more A shape, which is more feminine contour.  This procedure can be done alone or in combination with other contouring procedures.  The extent of the fat grafting of the buttock can be used to give more projection, or more rounded appearance, depending on the desires of the patient. 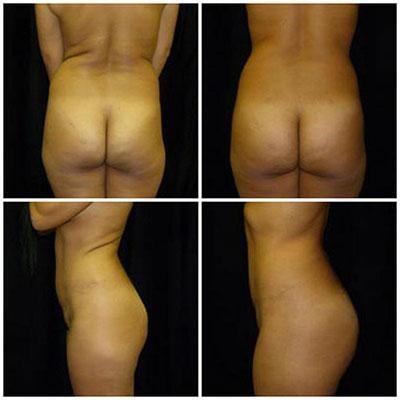 This is a 40YO lady from Destin, FL who desires some cosmetic improvement of her buttocks and flank area. She has some fullness in the flank area as well as some indentions in the lower thoracic and lumbar area of the back. She also did not have as much fullness in the buttocks as she desired. She underwent liposuction of the flanks and fat grafts to the buttocks area. 400cc of fat was injected into each buttock.

She is now much happier with the shape of the flank area and the fullness of her buttocks. This procedure is done as an outpatient procedure at the hospital. 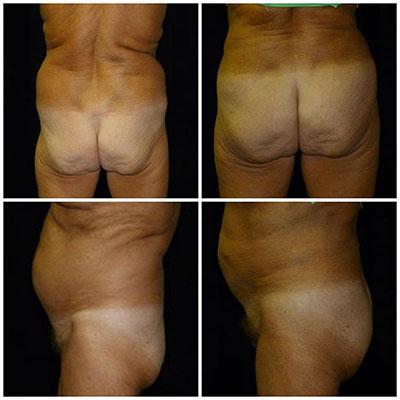 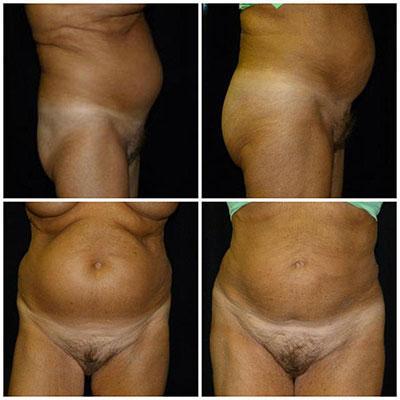 The patient underwent fat injections to the buttocks and liposuction of the flanks. This is also known as a Brazilian butt lift. As you can see preoperatively, she had some excessive fat in the upper flank area that was liposuctioned. This fat was then transferred to her buttocks. We transferred a total of 650 cc of fat to each buttock. On the side view, you can see a marked improvement of the projection of the buttocks as well as shape of the entire buttocks. 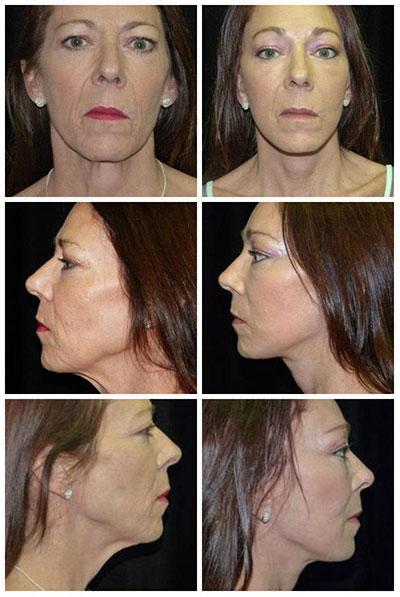 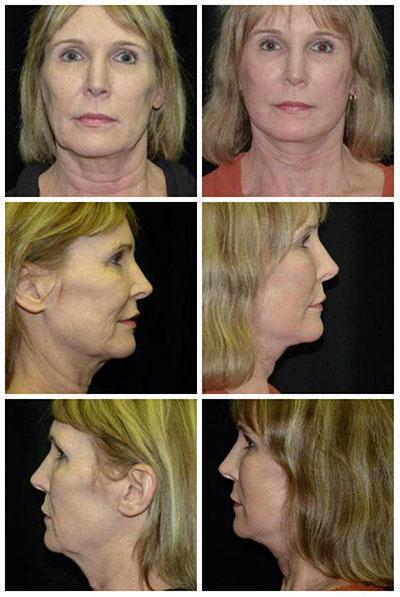 This is a 55-year-old lady who is seeing some of the classic signs of aging when people get in their 50s. She is noticing some looseness in the neck. She has loss of volume in the face, especially around the lower cheek area. She has loose skin along the jawline and loose skin in the face just lateral to the mouth.

Just simply a face and neck lift will not rejuvenate her face as much as we were able to do by tightening the skin as well as adding fat to the face area. Fat was added under the eyelid. Also, it was added to the lateral face area and the area just under the corners of the mouth. As you can see, the face is much more youthful now because the volume has been restored in the face. As people age, not only does the skin get loose and sag but also they lose volume in certain places of the face. The volume is restored with fat grafting. The fat grafting is a long lasting procedure unlike fillers like Juvéderm and Restylane. Once the fat is injected into the deficient areas and the blood supply is reestablished to the fat, the fat will remain in the face and can be very long lasting.

These procedures are usually done in the office. 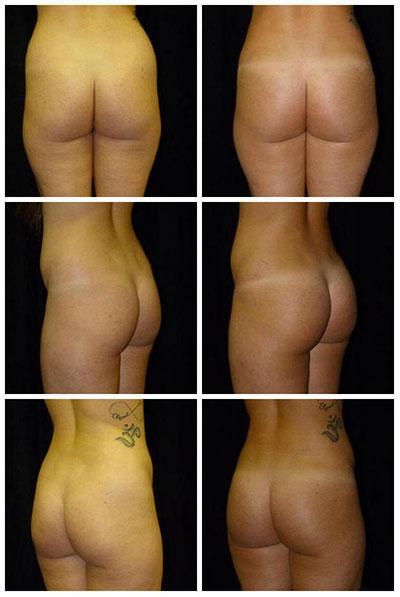 This young lady, shapely and statuesque, wished some improvement of her truncal contour, specifically her flanks and her buttock. She wished some more projection and a little more rounded contour of her buttocks. She has several sources of fat which could be used to address that issue but she desired only to use what fat could be collected from her flanks. She underwent safe liposuction removing fat from both flanks which was then processed and injected in each buttock. The fat was injected as superficially as possible to get as much improvement with the small amount of fat we had. In spite of the relatively small amounts of fat available for use, we got a nice improvement in her truncal contour with an improvement in her flank and in the shape of her buttocks. 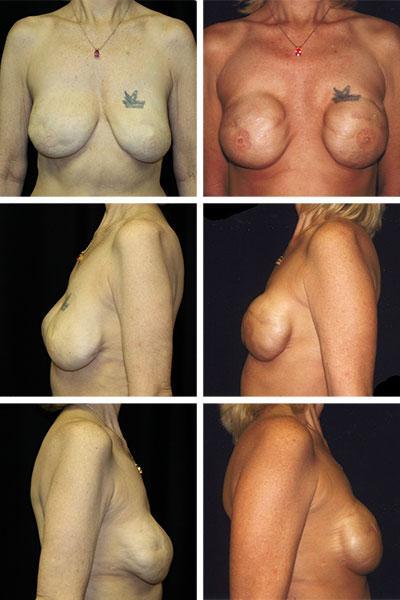 This is a 41YO lady that has had bilateral mastectomies and reconstruction by another surgeon.  She was complaining of a lot of rippling in the breasts after the reconstruction and also she didn’t like the defined implant in the upper pole.  In order to correct this, we did some fat grafting on her.  This helped put fat between her skin and the implant and camouflages the rippling and also help smooth out the upper pole of the breast.

Preoperatively, you can see the definite demarcation of the upper pole with a lot of rippling, especially on the right breast.  Postoperatively, fat grafting has greatly improved the rippling and camouflaged the edge of the implant in the upper pole.

Fat grafts are a procedure where fat is taken from one area of the body and is processed and then injected into another area where the fat is needed.  Once the fat receives a blood supply, it will live and give a very long lasting result.  On the same note, fat is removed from an unwanted area and will stay gone from the area where it is removed. 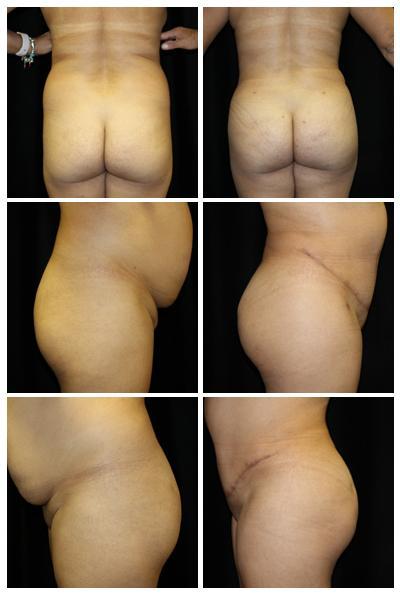