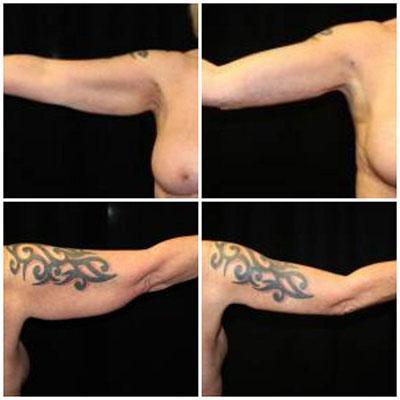 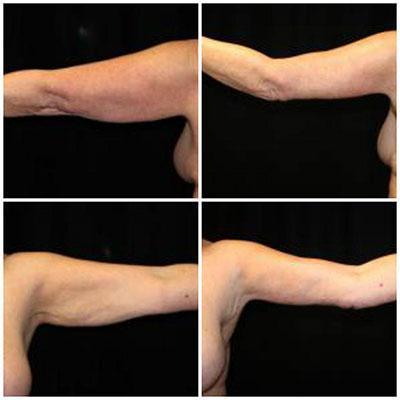 These are pictures of a lady who was complaining of loose skin with excessive fat and skin in arms with no muscle definition.  She underwent a brachioplasty with liposuction.  These are her post op views.  The scar is on the inside of the arm and is barely visible. 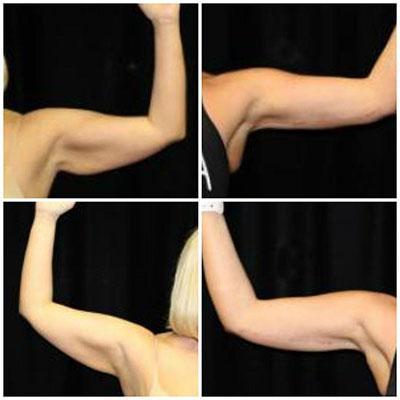 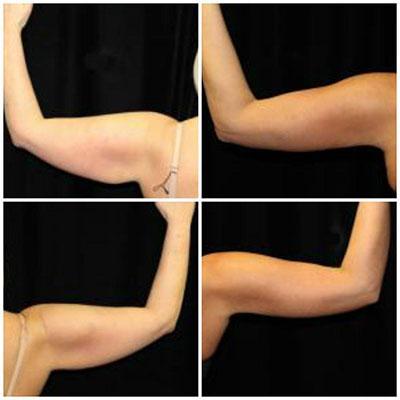 This is a 35YO lady from Pensacola, FL that had a lot of looseness in her arms as well as cellulite.  She was embarrassed to wear any type of sleeveless garments.  She is not overweight at all; she just has a lot of loose skin with just a little extra fat in the arms.  She underwent bilateral brachioplasties.  Her arms are now much tighter and she can wear any type of clothing that she desires. 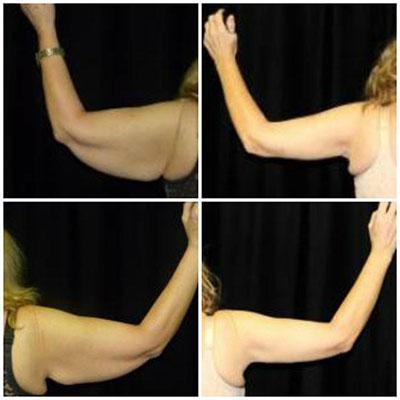 This is a 50YO lady that is having problems wearing sleeveless blouses and dresses. She complained of looseness in her arms and is very embarrassed about these. She underwent a brachioplasty. This resolved her issue and she can now wear any type of sleeveless dresses or blouses she desires. 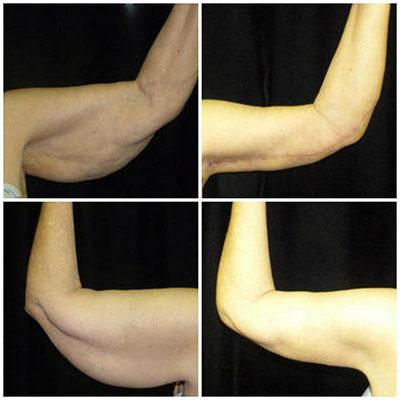 This is a 60YO lady that has been concerned with her arms for many years. She has a lot of excessive skin and fat in the arms. This has interfered with her wearing clothes with short sleeves or no sleeves. She underwent liposuction of the arms and a brachioplasty. She has a good shape to her arms and she can wear whatever clothing she desires. Once the redness goes out of the scars, they are hardly perceptible. 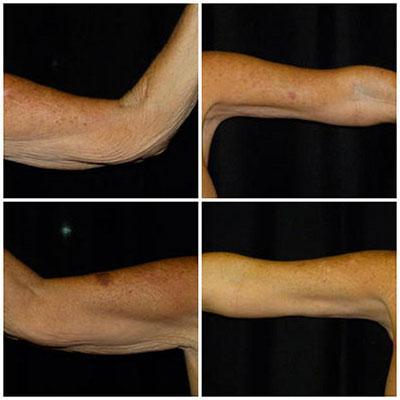 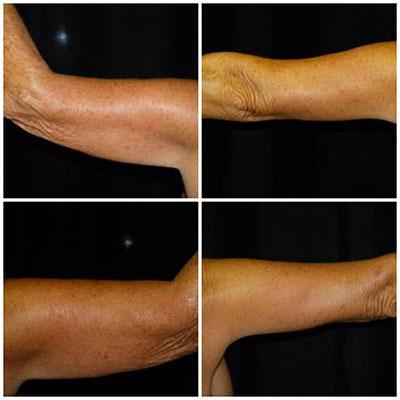 This is a 63-year-old lady who has advanced aging of her arms. She lives in Florida and is in the sun a lot. She had problems wearing sundresses and swimsuits because of the loose wrinkly skin on her arms. She underwent a brachioplasty. Postoperatively it shows that the arms are greatly improved. The scars are placed so they are not noticeable whether she is wearing sleeveless blouses or swimsuits. 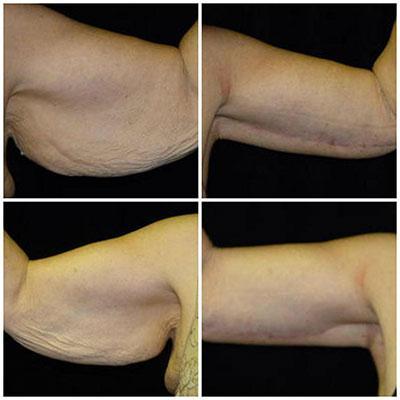 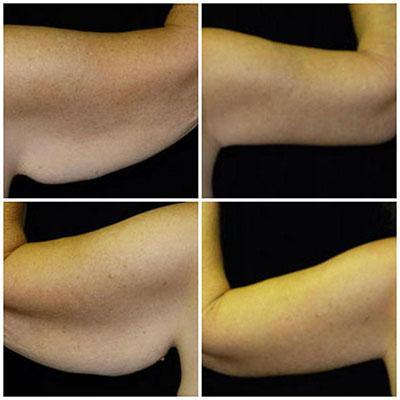 This is 60-year-old woman from Dothan, AL. She complains of excessive looseness in her arms. She says she feels like she has bat wings hanging down. She will not wear anything but long sleeves because of the hanging skin and fat of her arms. She underwent a brachioplasty. This has removed the hanging skin and fat. The scar from a brachioplasty is placed such that it is hidden except when the arm is held elevated. As you can see, the arms are significantly tightened and shapelier. This procedure is done as an outpatient. 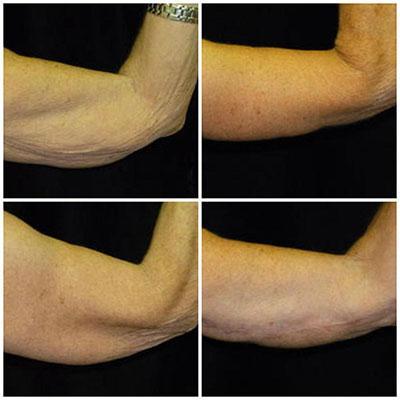 This is a 50-year-old lady who is thin but has a lot of loose skin on her arms and some hanging fat on her arms making her arms appear heavy. She underwent a brachioplasty. After undergoing the brachioplasty, this allowed her to wear any type of sleeveless dresses and blouses that she desires. 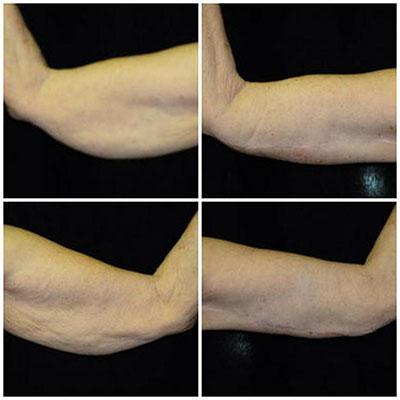 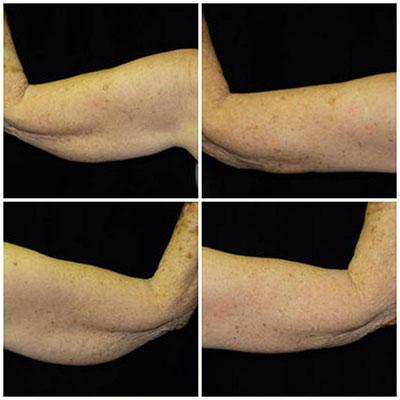 This is a 70-year-old lady who was complaining of hanging skin and fat in her arms. She was very self-conscience about wearing sleeveless tops and dresses. She underwent a brachioplasty to remove excessive skin and fat of the arms. The scars are placed so that they are hidden except when the arm is elevated. She says she can now wear any kind of dress or top that she desires. 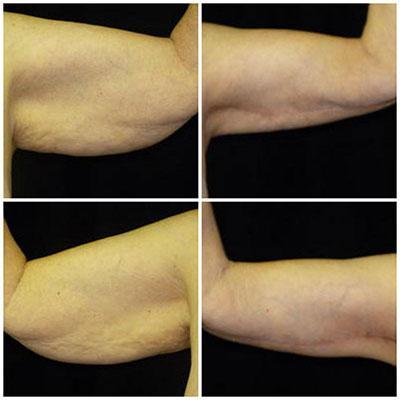 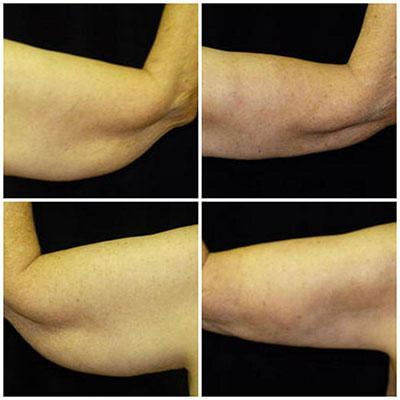 This is a 60-year old lady from Montgomery, AL who complains of excessive loose skin in her arms, lateral chest, and drooping breasts.  She has been exercising to try to get her arms tightened as much as she could.  However, they would not tighten for her.  She underwent a brachioplasty with excision of some excessive skin in the lateral chest area also.  Preoperative views show a lot of looseness and hanging skin in her arms.  Postop, the skin and fat have been removed.  The arms are now quite shapely. 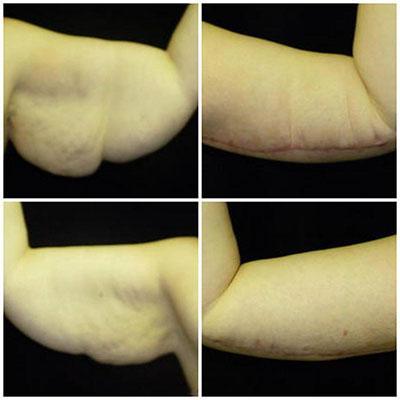 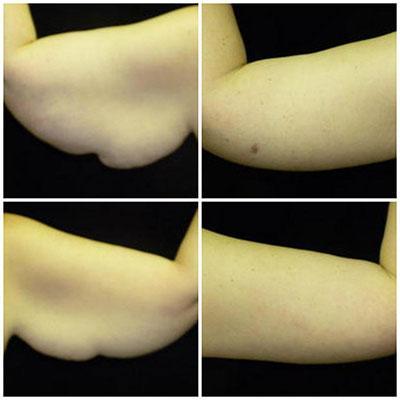 This is a 32-year-old lady who has lost some weight.  She also has congenitally heavy arms.  She would not wear any type of sleeveless or short sleeve shirts because of the excessive skin in her arms.  The patient underwent liposuction of the arms and a brachioplasty.  Postoperatively shows marked improvement of her arms.  She is also ready sleeveless blouses now.  The scar will be red for around 6 months or so.  Once the redness goes out of the scar, they will be less noticeable. 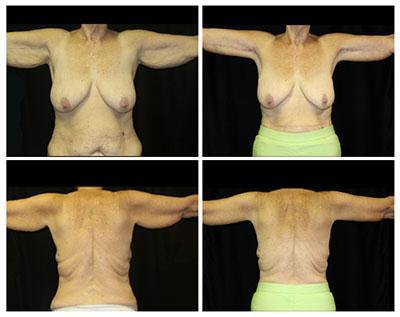 These are before and after on a patient who underwent a gastric sleeve and lost over 100lbs.  Her main concerns were the redundant skin and fat on her upper arms.  She is active and otherwise healthy- she was tall, statuesque, and an attractive lady on exam who had primarily loose skin to the upper arms.  There was very little fat.  She also had redundant skin on the lateral chest.  She underwent an L shaped brachioplasty.  This addresses the excess skin and fat on the arms and lateral chest.  The scar is hidden in the cup of the axilla.  The scar is placed on the inside of the arm so it is not visible from the back with the arms down by her side.  She got a very nice result.  The scars are flat, soft, and non-tender.  The contour of the arm and the lateral chest both have improved. 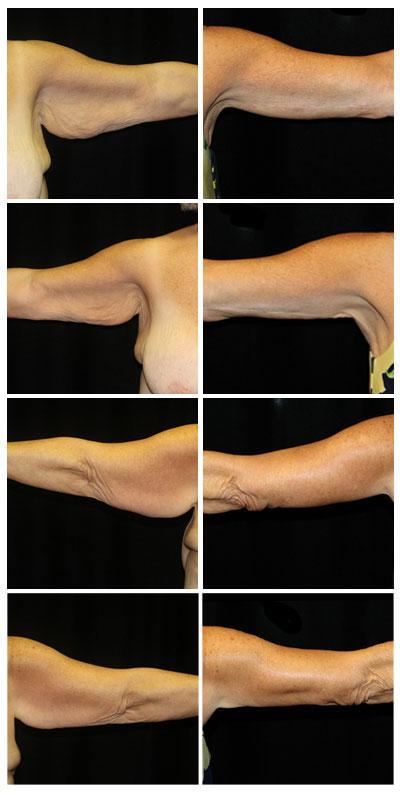 This is a 58YO lady that had lost a significant amount of weight.  She had quite loose skin in her arms and this kept her from wearing any type of sleeveless clothing.  Also, she had no definition in the shape of the arms.  She underwent a brachioplasty with lipo-sculpting of the arm and fat grafting to improve the appearance of the deltoid and bicep muscles.  This procedure is done in an outpatient setting at the hospital.  The scars are placed on the arms so that they are not noticeable. 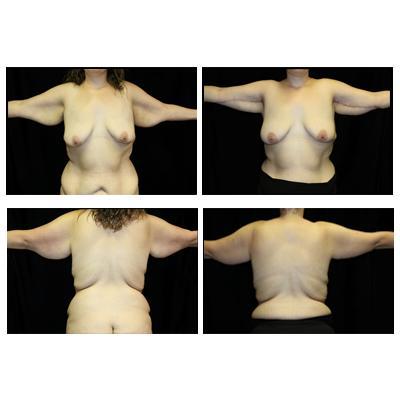 This lady had a gastric sleeve and lost over 100lbs.  She was interested in improving the contour of her arms and her abdomen.  She has the typical “bat wing” deformity of the upper arms which is the result of too much skin.  This problem is not amenable to some of the lesser laser and radiofrequency procedures.  She underwent a brachioplasty procedure that removed the excess skin along the inside of her arm and down the lateral chest.  This procedure not only improved the contour of her arms but tightened up a good portion of the loose skin on the lateral chest.  Her post op course was entirely unremarkable.  She used Cica care silicone sheeting for the scars.  She has gotten a little better than average result as far as the quality of the scars.  Her contour is much better and near symmetrical.